How to prevent condensation, mould and damp in your home 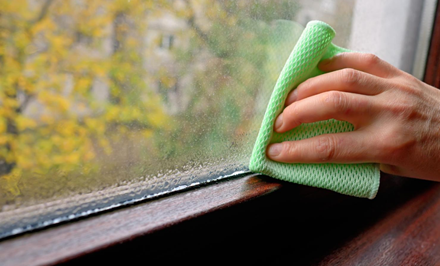 Everybody generates moisture in their homes through normal daily activities such as cooking and bathing. Condensation of moisture and water vapour occurs on colder surfaces, and mould spores form on the surface when the vapour condenses into water.

Residents are responsible for ensuring that they create the right combination of heating, ventilation and treatment to keep their homes free from the effects of condensation.

There is always some moisture in the air, even if you can’t see it. If the air gets colder it can’t hold all the moisture and tiny drops of water appear. This is condensation. You may notice it when you see your breath on a cold day, or when the mirror mists over after you have a bath.

Condensation occurs mainly during cold weather, usually from October to April, whether it is raining or dry. It does not leave a 'tidemark' and appears in places where there is little movement of air. Look for black mould in corners of rooms, on or near windows, in or behind wardrobes and cupboards. It will often form on north-facing walls that don’t get direct heat from the sun.

Condensation is not the only cause of damp. It can also come from:

These causes of penetrating damp often leave a 'tidemark'. If you believe it to be one of the above causes, you should contact us and have the necessary repairs carried out to remove the source of damp.

It may take several weeks of ventilation to dry your home out, but using a dehumidifier will help.

If you do not think the damp comes from any of the above causes, it is probably condensation.

Firstly, treat the mould already in your home. To treat and remove the mould, wipe down the walls, ceiling, windows and door frames with a fungicidal wash in accordance with the manufacturer’s instructions. Do not use bleach as this is water based and does not actually remove the mould.

Do not try to remove the mould by brushing or vacuum cleaning as this can increase the risk of respiratory problems. Occupants of buildings with damp or mould are at increased risk of experiencing health problems such as respiratory symptoms, respiratory infections, allergic rhinitis and asthma.

The only way of avoiding severe mould is by eliminating the dampness, so if you deal with the basic problems of condensation, the mould should not reappear.

How to reduce condensation

Looking after your home